Everyday media report news about the current European refugee crisis. The UK splits over the EU referendum as the debate intensifies and June 23 comes closer. So the opening in Lampedusa of Museo della fiducia e del dialogo per il Mediterraneo (The Museum of Trust and Dialogue) will make us think more about the role of trust and dialogue, the inspiration of this museum.

For the first time the Sicilian island will be at the heart of an international cultural programme that makes the Mediterranean not only a refugee shelter, but also a cultural centre. It will be a bridge between different cultures, where it all begins.

The museum, that President of the republic Sergio Mattarella launches on 3 June, will host works of art coming from the National Bardo Museum of Tunisi, from the Galleria degli Uffizi in Florence, and the major museums of the Mediterranean area.

It will be a small museum on an island with around 6,000 inhabitants, but it will have a huge social and symbolic impact. It will be a temporary museum, as it’s due to close on 3 October 2016, the anniversary of the sinking of a boat  full of migrants sinked half mile away of Lampedusa shores, where 368 people died. That day has been nominated Giornata dell’accoglienza e della memoria (Welcome and Remembrance Day). 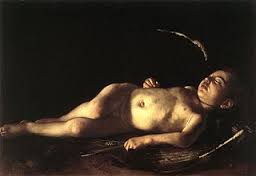 The highlight of the museum will be the Amorino (Sleeping Cupid) by Caravaggio, lent by Galleria degli Uffizi in Florence to commemorate Alan, the three-year-old Syrian child whose image shocked the world after he drowned in 2015 in the Mediterranean Sea.

Not only traditional works of art will be on display, but also relics from the shipwreck in which Alan died, also included in Gianfranco Rosi‘s documentary film Fuocoammare.