Italians and the UK is a project by journalist Lorenzo Colantoni and photographer Riccardo Venturi about the role Italians had and still have in the UK. The book, whose preface was written by Italian ambassador in London Pasquale Terraciano, gathers together photos and stories of Italians living in the UK. From film directors from the Isle of Wight to a hairdresser who has received a prestigious MBE thanks to his talent. The project itself features also a web documentary and a photo-reportage that will be published on the August issue of National Geographic Italia, with the support of the Ministry of Foreign Affairs and International Cooperation. 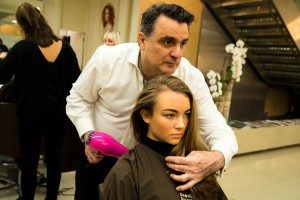 Lino Carbosiero, hairdresser. He worked with Hillary Clinton e Madonna, among many others.

Sixteen stories in total, divided into five sections: Italians from the end of the world, Family life, Prisoners of War, Dreams, Sweat and Bricks and 24 Hours in London. Italians and the UK features not only famous people such as singers Jack Savoretti and Paolo Nutini and music director Antonio Pappano, but also common people and community and family stories.

They all wrote the history of Italian immigration in the UK and they are still shaping its evolution. Italians and the UK is not just a journey through time and space, it’s an adventure that suits perfectly in the post-Brexit debate.

These sixteen stories are tales of love, careers, inspiration and innovation, from the 19th century to the present day.

Every story is a different page and a different video that allows the audience to discover more about these people featured in the project. For example the story of Aqua Sanfelice di Monteforte (section 24 Hours in London), who moved to London in 1999 without any degree and now is a Lloyd’s broker. And thanks to her you discover that Lloyds have insured satellites, garden gnomes and even the risk of becoming a vampire or a werewolf.

Heading up to the very north we discover the story of Andrea (section Italians from the World’s End), the ‘fugitive brewer’, thrown from the equator to Cairndow, on the west coast of Scotland, in just six days. His idea was to gain an experience for a few months and then leave and head to east of London. Three years later, he is still there. Brewing mixes creativity and hard work, two ingredients that Italians abroad have proved to have.

Italian gestures are one of the internet’s favourite topics, with tutorials to learn the seemingly unlimited hand gestures that embellish Italian conversations. Although we…