A story of  blackmail, conspiracy, courage and fear. A Very Sicilian Justice, the new documentary by Paul Sapin and Toby Follett, narrated by actress Helen Mirren, on Al Jazeera website, is an intimate portrait of Antonio Di Matteo, an Italian judge living under constant threat as he tries to fight against mafia.

A former mafia assassin-turned-state-witness, as well as judge Borsellino’s brother, and the son of late former mayor of Palermo Vito Ciancimino, also known as ‘Don Vito‘, are featured in the film too.

Antonio Di Matteo is one of the most threatened men in Italy. Inspired by Italy’s most famous anti-mafia judges Giovanni Falcone and Paolo Borsellino, both assassinated by mafia in 1992, he is the chief prosecutor in Italy’s ‘trial of the century’ and has more than twenty bodyguards ensuring his safety 24/7 .

There are ten men on trial, five are mafia bosses and five are members of the political establishment, including senior police chiefs and politicians. They are accused of conspiracy between mafia and the state.

During the 1980s they prosecuted hundreds of Cosa Nostra members in what was known as the Maxi Trial (Maxi Processo), the largest mafia court case in history. Four hundred and seventy five mafiosi were brought to court in Palermo and 346 were found guilty.

‘For over 130 years in Italy we pretended the mafia didn’t exist. No. The mafia in Italy exists. The mafia in Sicily exists. And it’s the judiciary’s duty to fight and try to destroy the mafia’, says Saverio Lodato, author of Forty Years of Mafia.

Di Matteo stated: ‘If we don’t uncover our history we can’t progress. Otherwise this disease of the past, that still plagues us today, will infect our future’.

Di Matteo is now trying unravel the knot on Italy’s so-called ‘season of terror’ from 1991 to 1994, when mafia organised bombings and murders to force a negotiation with the state. 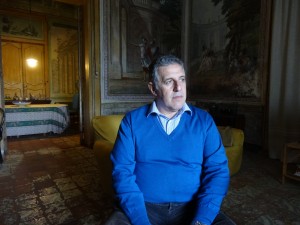 ‘I was brought up with the legend of Giovanni Falcone and Paolo Borsellino. I was a law student when they were working on the Maxi Trial. In those men I saw a chance to fight back’, Di Matteo says.

The judge has received many death threats, but politicians have been sitting in silence so far. However, his hasn’t prevented him from attending the courtroom and the trial is ongoing.

You can see the documentary on Al Jazeera English clicking this link.