Massimo Vitali’s first UK solo exhibition in five years opened on 20 May at Ronchini Gallery. This exhibition showcases later works from across Vitali’s 22 years of experience, spanning from 2011 to 2014. Regarded as one of the most influential contemporary photographers working today, the Italian artist recalls how it all started with a knitting magazine and ended up with The New York Times.

Starting from London, you studied Photography at the London College of Printing. What did you love and hate most about this city?

Among all the European cities, London is the most difficult one and the less appealing. I lived in London in the ’60s. Those were fantastic but difficult years as London is not an easy place. Nothing makes you feel part of its life. In the past it was unwelcoming because it was primitive: 70% of the houses did not have bathrooms. I lived once in a house located in a nice area, but without the toilet. To have a bath, you had to go to public toilets or use the tub in the kitchen. In the past, that was extreme. Today some buildings are still extreme. I have many friends here, I come to London from time to time but I feel detatched. Also, this city has been transformed into a gym for Arabs. It’s unattractive to artists and to people unrelated with the art market. English artists used to live in London many years ago, now they cannot afford it. That’s why London is so oppressive. But I love its parks. Public spaces are the best parts.

Where does the passion for photography come from and when did you decide to turn it into a profession?

When I was 12, my father’s friend, Lamberto Vitali, art critic, gave me a camera. At that time people used to buy two pairs of shoes during their whole life. That camera was a symbol for me and I felt obliged to use it and to develop a passion for photography. In high school I used to take pictures for a knitting magazine and with that money I bought better cameras. When I finished school, I bought a train ticket to Baghdad to take photos there. I arrived in Afghanistan, I was arrested by the police. When they released me I carried on with my trip by bus. At that time I had a specific idea about the reportage, but I changed it.

Because what you do has nothing to do with reality. I worked on commission for the terrible ’70s and ’80s Italian newspapers. Then I worked in cinema. When I was around 50 and it was time to get retired, I decided to do what I really cared for: after two years The Beach Series came out. It happened all by chance. My cameras were stolen from the car, all of them but they left a 20×25 (8×10) camera that was too heavy. That camera had a very limited depth of field, but I could correct it shooting from a high place. So I took a tripod and with a friend of mine, an American sculptor who lived in Pietrasanta, we built a sort of alluminium tower. I took the first photo, the one I call “00”, in Pietrasanta. I went to the beach, put the tripod in the water and took a shot in black and white exactly every 40 minutes using the same framing. By chance there was a colour film in the camera. Black and white pictures were terrible, but the colour ones were not so bad. One year later, I had shot all the most important beaches in Italy. 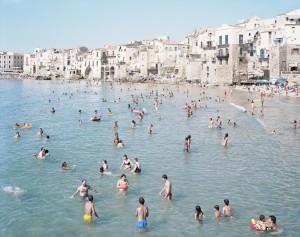 In 1995 you started the Beach Series. Which changes did you notice during the years?

Twenty years ago nobody had tattoos or cameras or mobile phones. Now we have drones and helicopters.

How does the research of the places work?

The true artistic project takes place before the photo with my staff, the organisation of summer travels, dinners, hotels. Then obviously the picture is what you sell. I have been working with the same assistant for twenty years. We discuss ideas and he helps with everything. He always tells me the place I choose is horrible (he laughs). There is much more behind a single photo. Basically, I shoot beaches that are easy to reach with my mini van. That is why a lot of pictures have been taken in Italy. But I also shot in France and the US. In January I went to Iceland for The New York Times and I took a digital camera. I was recently commissioned by an American newspaper to shoot Lucca. I have never taken a picture there. 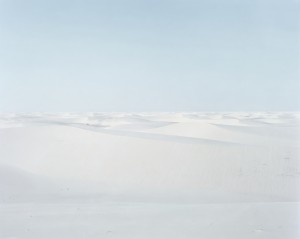 I have my personal account on Instagram. It can be amazing and terrible at the same time. I don’t like the need of taking fake pictures. Nobody accepts reality anymore. Young girls change their expressions while taking photos. I saw a girl who was happy while taking a selfie and a few seconds later she was angry. The problem of social media is that all the photos now are fake. When I look for new places on internet, 90% of the pictures are fake. They also create modified landscapes because that’s what they think people would like.